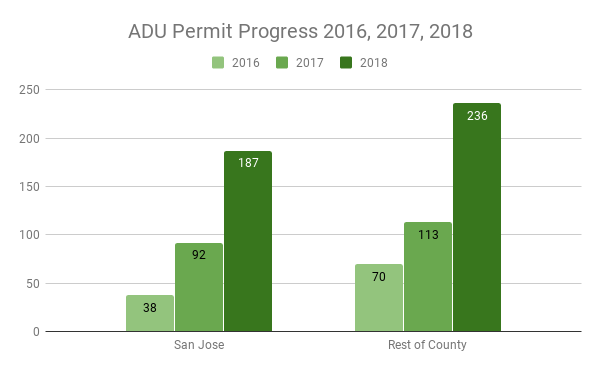 Permitting numbers provided by individual cities at the beginning of 2019.

Some good news to report– the City of San Jose doubled the number of ADUs that were permitted between 2017 and 2018 and more than quadrupled the number permitted in 2016. The cityâs updated ADU ordinance, which became effective in July 2018, focused on reducing restrictions and making the permit process easier for applicants. A major addition under these updates was the promise of a free consultation process provided by the City, providing applicants the opportunity to meet with a planner to ensure that proposed plans comply with the existing code and development standards prior to applying for a permit, a significant cost-savings to property owners. View the San Jose Planning Departmentâs online ADU portal here.

However, there are additional hurdles that still need to be addressed. As the new consultation service was ramping up, only 81 ADUs were completed in the city in 2018, despite the 350 permit applications that were started and the 187 permits that were issued. This drop off is likely due to a number of factors. ADU building permits are active for one year, so this point-in-time sample may not be capturing all ADUs that are eventually completed. However, the drop off between applications that are started and permits that are issued is significant. Â Applicants continue to express concerns about delays in the process and other significant challenges. Discrepancies between the Planning and Fire Departments regarding setbacks and sprinkler requirements have stalled many projects. Additionally, many interested homeowners have identified high City fees as another barrier, as it significantly increases the cost to develop their unit.

The San Jose City Council took action at its June 25th meeting to address some of the remaining barriers. Mayor Liccardo, and Councilmembers Carrasco, Arenas, and Foley submitted a memo outlining actions to enhance the Cityâs ADU program, as part of a broader Moderate-Income Strategy discussion. SV@Home was strongly supportive, while pushing for a 60-day review period, rather than the current 120-day period and for the City to waive impact fees for developments less than 750 square feet. Read our letter here.

While there is more that can be done, it is important to begin with the efforts that have already been approved by Council and to make sure they are being implemented swiftly and properly. Here are outstanding ADU items still to be finalized by City staff:

SV@Home continues to advocate for less restrictive ADU ordinances throughout the county and to support programs that provide resources to interested homeowners. Most cities in Santa Clara County have updated their ADU ordinances in response, as well as to recent changes in state law. Some have seen significant increases in ADU permits due to these changes. Despite adoption of new regulations, there remain significant barriers in the process that has led to a drop-off between ADU applications and actually constructed ADUs. Expensive fees and building code standards add costs that many homeowners are not able to absorb. San Jose has taken some steps to relieve these stressors, and other cities should consider how to address similar challenges in their own communities.

Learn more about ADUs in our Resource Hub.