Welcome to SV@Home’s Policy Rundown, your need-to-know overview of important housing policy actions and developments from the past two weeks.

On August 31st, as part of an ongoing effort to provide affordable housing options for underserved agricultural workers, the Santa Clara County Board of Supervisors approved a $9.9 million Measure A investment to advance a 73-unit affordable housing proposal in Morgan Hill. The South County project, located at 15440 Monterey Road, will include 30 units for agriculture works, 18 rapid rehousing units to help families with special needs and individuals who had been experiencing homelessness, and 24 units for low-income families.

According to the County, there is an estimated shortfall of 1,400 seasonal and 700 long-term housing units required to adequately house the more than 8,000 Santa Clara County agricultural workers who contribute to the County’s agricultural industry.

SV@Home strongly supports the County’s investment, along with the City of Morgan Hill’s $400,000 contribution, that will help to bring housing options for individuals in desperate need of housing solutions. 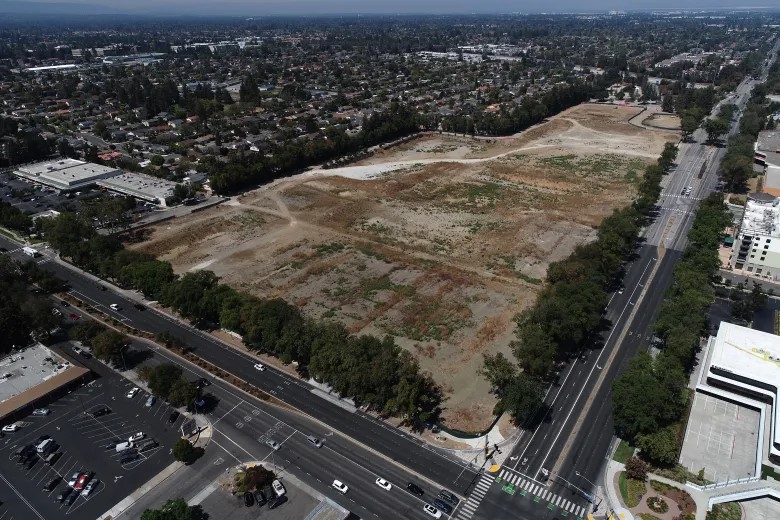 This Tuesday, Cupertino’s City Council received a Staff report providing a status update on the Vallco Town Center Development Project, which is using the state streamlining law for affordable and mixed income development – SB35. Although no action was taken or scheduled to be taken, the update illustrated the political and procedural challenges that have undermined progress on this important housing development in Cupertino.

The timeline of this mixed-use proposal, which will bring 2,402 new homes to Cupertino, including 1,201 of them affordable, has been beset by numerous roadblocks. While the city formally and ministerially approved the proposal’s SB35 application in September 2018, progress has been slow due to a number of factors. Critically, the city has not yet issued building permits to begin construction, so only initial demolition and site preparation work has proceeded. The project had already been delayed due to a lawsuit that was eventually defeated in May 2020. This delay was significant enough that the California Department of Housing and Community Development (HCD) weighed in with the city to clarify that the developer should receive an extension of its three-year SB35 ministerial approval.

SV@Home is a strong supporter of the project and we have called upon the City to uphold its commitment to creating affordable housing and fulfill its duty under SB35 to advance the project by issuing building permits without delay.

Vallco is the largest affordable housing project in the City of Cupertino’s history. The project will be a community asset for the current and future residents of Cupertino for years to come and SV@Home looks forward to continuing to support both the City of Cupertino and the SandHill Property Company as this project advances through to completion.

Next Tuesday, after years of advocacy by tenant groups and mobilehome residents, the Mountain View City Council will consider the extension of the city’s rent stabilization policy to cover mobilehomes. While Mountain View voters overwhelmingly approved rent control city-wide by supporting Measure V in 2016, the City had long taken the position that the Community Stabilization and Fair Rent Act (CSFRA) does not explicitly apply to mobilehomes. Thanks to the hard work of mobilehome advocates and ongoing concerns that mobilehome residents are disproportionately on low and fixed incomes, the Council instructed staff to propose a way to extend local limits on allowable rent increases to stabilize these communities and prevent displacement.

Staff’s proposed ordinance would cover both mobilehome owners and renters by limiting rent increases to the annual Consumer Price Index (CPI) while providing mechanisms for park owners to ensure a fair rate of return. The City’s Rental Housing Committee, which currently oversees the implementation of the Community Stabilization and Fair Rent Act (CSFRA), will also be charged with oversight of the mobilehome ordinance’s implementation.

SV@Home is a strong supporter of the extension of rent stabilization protections to mobilehome residents. The City of Mountain View has an important opportunity to build on its existing tenant protection policies and follow in Sunnyvale’s footsteps to support vulnerable tenants, no matter what type of home they live in.

Next Tuesday, the Sunnyvale City Council will consider amendments to the Lawrence Station Area Plan (LSAP) that would add development capacity for over 3,600 more homes above and beyond the original housing-rich Plan. The original LSAP, adopted in 2016, envisions a vibrant, mixed-use neighborhood centered on the Lawrence Caltrain Station with more jobs, retail, housing, and open space. Following the Plan’s adoption, the Sunnyvale City Council decided it wanted to be even more bold in potential housing opportunities at Lawrence, and instructed staff to explore ways to further increase transit-oriented residential density.

Tuesday’s discussion is the culmination of years of hard work by staff to fulfill the Council’s housing-rich vision. The proposed amendments would increase the area’s housing capacity by 3,612 for a total of 5,935 units. They also tackle a number of other important issues around Lawrence, including developing a Sense of Place Plan that will improve the streetscape for pedestrians and bicyclists.

SV@Home strongly supports the proposed amendments that will bring the potential for thousands more homes near transit and encourages community members to attend and support the Plan’s vision for a more sustainable and walkable community near the Lawrence Caltrain station. We are thankful to the Sunnyvale City Council for their leadership in planning for dense housing around Caltrain and to Sunnyvale City Staff for translating that leadership into an exciting, region-leading plan.

On August 31st, the San José City Council approved the first tranche of Google’s Downtown West Community Benefit package: $3 million that will be allocated to anti-displacement programs including tenant and landlord outreach, capacity building for non-profits, a preservation pilot program, and work on a conceptual community land trust. These funds are part of Google’s $7.5m early payment to the City of San José in line with the Downtown West Development Agreement with the remaining funds to be allocated in the coming months. They are only one component of the much broader over $200m in community benefits Google is providing the City of San José through the landmark development agreement, including $154.8 million for the groundbreaking new Community Stabilization and Opportunity Pathway Fund, which will be governed with the input of community members.

SV@Home has been a strong supporter of the Downtown West proposal, which will bring up to 4,000 new homes, 25% of them affordable, to Downtown San José. We will continue to work closely with the City of San José and Google on the implementation of the overall proposal to make these homes and affordable homes a reality. 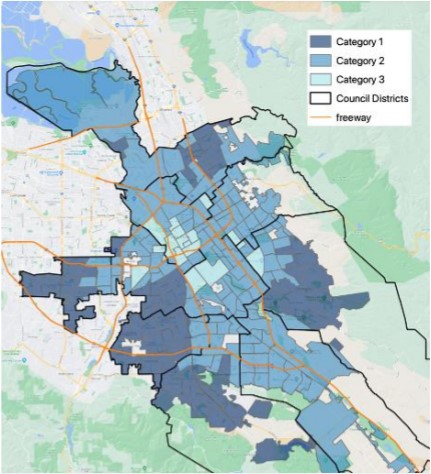 The proposed policy was explicitly designed to be responsive to the Federal and State mandates to Affirmatively Further Fair Housing through the use of public resources and policies to promote the racial and economic integration of segregated areas with concentrated wealth. The policy categorizes areas of the city into three categories (a summary can be found here): opportunity areas (Category 1), with demographics and resources highly associated with “positive life outcomes”; areas that are not high-resourced opportunity areas, but neither are they particularly high poverty or high crime areas (Category 2); and areas that have high rates of poverty, high rates of violent crime or both (Category 3).   Upon adoption of the policy, affordable developments proposed in Category 1 neighborhoods would be incentivized with pre-development support, and targeted for a higher percentage of all affordable housing funds. After an initial three year transition period, the majority of affordable funds (60%) would be targeted to these Category 1 neighborhoods and a decreasing share would be available in the Category 3 neighborhoods.

There were substantive concerns raised in the public outreach ahead of the Council action that staff sought to address and were reinforced through amendments from the council. The policy included incentive mechanisms to ensure that senior, family, and supportive or special needs housing opportunities were spread throughout the city. Resources would continue to be available to lower-income neighborhoods where residents wanted to see new affordable development. The Housing Department would coordinate with the Planning Department through the Housing Element Update process to ensure that there would be feasible sites available for affordable developments in Category 1, higher-resourced areas. All agreed that regular progress reporting, and associated policy and planning work, would be essential to the policy’s successful implementation.

As SV@Home noted in our letter to Council, the human and social costs of the lack of affordable housing in our communities are overwhelming. These costs are borne disproportionately by people of color and lower-income workers, and include increased rates of community and family violence. In contrast, affordable housing has been shown over and over to measurably decrease family and community violence, and these benefits are most significant in lower-income neighborhoods.

We also note the disconnect that some of the areas identified in the high crime rate maps include those where significant new housing is planned, and where the council has advocated for policies to ensure that affordable housing is a priority. For example, the maps presented to council include in Category 2 much of the Santana Row Mixed-Use Urban Village, most of North San Jose (currently dominated by office parks, and targeted in the General Plan for more than 20,000 additional new homes, 20% of which will be required to be affordable), and over half of the Passeo de Saratoga Urban Village on the west side that would otherwise be in the high-priority Category 1. Additional discussion is clearly warranted.

We are hopeful that the additional analysis will include a more grounded assessment of the value of affordable housing in communities throughout the city, and coordination with the Planning Department to better correspond to the future plans for dynamic mixed-income communities.