Welcome to SV@Homeâs Policy Rundown, your need-to-know overview of important housing policy actions and developments from the past two weeks.

Last week, the Diridon Station Area Advisory Group (SAAG) reconvened for the first time since January to receive an update on the Cityâs timeline for the Downtown West proposal and the Station Area Plan (DSAP) amendments, as well as on the Cityâs ongoing community engagement. While the City initially planned for final Council decisions on both of these important items by the end of the year, the COVID-19 public health crisis has delayed them until early 2021. The latest targeted schedule is below: 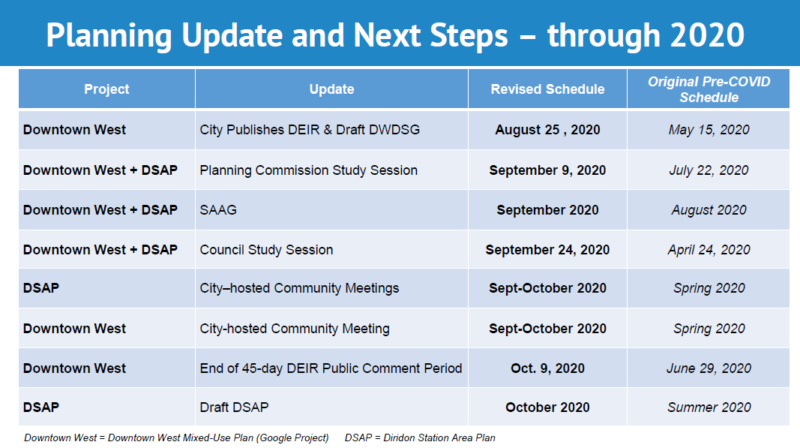 Additionally, the City is continuing to work on several studies related to displacement and affordable housing that will have important implications for the Station Area. We expect the Affordable Housing Strategy, which will outline an approach to meeting the Council-mandated 25% affordability requirement, to be ready by late September 2020.

During the meeting, members of several neighborhood associations, which have created a new umbrella organization called the Diridon Area Neighborhood Group (DANG), raised a number of concerns related to building heights, park space, and transit. They also requested that the City create a DSAP sub-committee or working group that included neighborhood groups to review proposals as they came forward in the Station Area.

Overall, SV@Home is supportive of the latest staff proposals to go big on housing and keep the process on track. We recognize that there are a number of factors that will influence how to approach reaching the DSAPâs 25% overall affordability requirement and believe the City should strive for a balanced approach in terms of levels of affordability and number of units actually built in the Station Area. With such a major investment in infrastructure and the neighborhood comes a need to ensure that people of all incomes are able to enjoy these public resources. It is important to note that because the Station Area is a core part of Downtown, the planning decisions the City makes are important to residents throughout the city.

For the latest update on SV@Homeâs position, check out our Diridon page here.

Last Tuesday, June 16th, the San JosÃ© City Council addressed the timeline for consideration of the Commercial Linkage Fee (CLF), which will collect fees from developers of new commercial real estate projects to fund affordable housing. Because the process around the CLF has a long history of missed deadlines, the Council acted on a proposal from Councilmember Peralez to address market uncertainty by placing a cap of $20 a square foot on the future fee if there were further delays in the process. In a letter endorsed by a diverse group of 35 organizations, SV@Home argued that it was premature to set an arbitrary cap before the community had the opportunity to read the staff report and provide input.

Despite reports from City staff that commercial development is struggling in the uncertainty of the current environment, a 500,000 square foot office project at Santana Row received final building permits in May. And at its meeting of the 16th, the Council approved the 3.8 million square foot City View Plaza office project. Googleâs massive Downtown West Project will come back next Spring.Â  Development continues to move in San JosÃ©, and it will be critical that we make a case for the moral responsibility of the city to address the impact this will have on the demand for affordable housing.

From here the process will pick up pace.Â The long-awaited fee studies are scheduled to be released on July 17th, there will be a community outreach meeting the week of July 27th, City staff will release recommendations on August 14th, and the City Council is scheduled to vote on August 25th. The CLF has the potential to generate $100s of millions of desperately needed resources over the next few years.Â  SV@Home will continue to provide updates and share opportunities for engagement.

On Tuesday, the San JosÃ© Council also extended the period of time covered by the Cityâs Eviction Moratorium, which prevents evictions for non-payment of rent, until the end of August. Without this action, the moratorium would have ended at the end of June. This action was important because the transition out of the State of Emergency is happening gradually, and until the economy returns impacted renter households need protection from the loss of their homes.Â  Once the moratorium ends, tenants will have one year to pay back rent, with 50% due at the end of the first six months.

While the majority of renters continue to pay rent, we know that many are struggling to keep up and many are making only partial rent payments.Â  This not only impacts renter households but also the financial stability of property owners who must continue to pay building costs and make mortgage payments.Â  SV@Home has recommended strong advocacy for Federal and State efforts to provide emergency rental assistance to close this gap.

Housing Department staff also reported on community outreach efforts around the tenant and landlord rights and responsibilities. City staff has exhibited regional leadership in communicating to residents, but it was clear that getting the word out is proving to be extremely difficult. SV@Home has committed to working to ensure that the protections that have been put in place, both in San JosÃ© and throughout the County, are widely understood and accessible to vulnerable households and landlords.

Last Tuesday the San JosÃ© City Council approved the Mayor’s June Budget MessageÂ and voted on theÂ 2020-2021 Budget.Â  This discussion included a review of theÂ breakdown of funds anticipated from Measure E,Â Â the real estate transfer tax for affordable housing that was passed by voters in March.Â  City staff continue to project that Measure E will generate $30 million over the coming budget year beginning July 1. The funds will be allocated as follows:

In a related action this week, the City Council approved the recommendation from staff to designate the Housing and Community Development Commission (HCDC) as the official oversight body for the Measure E funds. HCDC is an active body, staffed by the Housing Department, with significant relevant experience reviewing both policy development proposals in the city.Â  The commission will be responsible for helping ensure public dollars raised through Measure E are invested in innovative affordable housing and homelessness prevention solutions and as outlined in the adopted spending prioritization plan.

SV@Home, with broad support from our partners and allies, was the sponsor of the Measure E ballot initiative.Â  We are pleased to see funds becoming available, even as projected funds will be limited by the current economic situation.Â  We look forward to working with the City and the newly charged HCDC oversite body to respond to the additional affordable housing needs laid bare by the pandemic, and to begin to turn the corner on the affordable housing crisis we faced long before.

On April 28th, the City of San JosÃ© asked SV@Home to convene discussions with thought leaders in the housing industry to brainstorm about the challenges facing landlords, homeowners, and tenants with the goal of identifying additional local, State, and federal responses to the COVID-19 crisis. In response, SV@Home held five convenings and talked to a number of housing and financial experts one-on-one to gather information and ideas. SV@Home shared the report with the City Council at its June 23rd meeting.

As noted in the report, Covid-19 has laid bare the inequities in our housing market, and the strong connection between housing and health. Housing and homelessness are issues that deserve our attention. We thanked the City for the proactive steps it has taken to date to respond to the immediate crisis, including the eviction moratorium discussed above. We then laid out immediate/short-term responses to keep people housed, and mid-term/longer-term recovery responses to respond to the housing market and the need for system/structural change, which included actions to:

This is an ever-changing situation and all good ideas must be considered. SV@Home will continue to convene and reach out to community members to develop solutions that can be brought forward to policy makers in San JosÃ© and throughout the County.

On Monday, Palo Alto held a preliminary prescreening on a Sand Hill Property Company proposal to rezone an office park parcel to allow 187 units of housing and 52,500 sq ft of office space at 3300 El Camino Real. The hearing was the first to come forward under the Councilâs new Planned Housing Zoning (PHZ) process, which was adopted earlier this year.Â Under the PHZ process, the developer will have to provide 20% of the homes as affordable. A City Council decision on how developers can meet this requirement was deferred to a later date.

While public comments were mainly positive and supportive of housing at the site, Council feedback was mixed, with no clear majority support for housing. No action was taken, however, as this pre-screening process was designed to provide early feedback to developers before further time is invested into a proposal. It will now be up to the developer, Sand Hill, to consider how they might move forward.

SV@Home strongly supports the opportunity of creating new housing at a site currently zoned exclusively for office, and believes this is exactly the type of project that Palo Altoâs PHZ process was created to support. While the City Council has stated that affordable housing is a top priority, it continues to drag its heels on the policy changes necessary to make housing development financially feasible (loosening restrictions on heights, parking, and retail requirements) or incentivize the creation of affordable homes.

On Tuesday, the Santa Clara County Office of Supportive Housing (OSH) presented a report to the Board of Supervisors in response to Board President Cindy Chavezâs March request for recommendations on accelerating effective spending of 2016 Measure A funds. OSH staff recommended and will pursue:

OSH also presented on a new Memorandum of Understanding they recently established with VTA and its Office of Real Estate and Transit-Oriented Development (TOD) to create affordable, supportive, and workforce housing at up to four VTA TOD sites. This partnership has the potential to generate up to 550 new affordable housing units. County staff have proposed and are planning to pursue an $800,000 cost sharing agreement with VTA to fund predevelopment activities that would further accelerate these opportunities.

SV@Home spoke in support of OSHâs proposals as well as this latest partnership between OSH and VTA. We look forward to continuing to support innovative approaches to creating more opportunities for supportive and other affordable housing by leveraging Measure A funds.

On Tuesday, the newly formed Bay Area Housing Finance Authority (BAHFA) held its first meeting to respond to the 9- County Bay Areaâs chronic housing affordability challenges. Created by last yearâs AB 1487, BAHFA will work together with all 101 cities and nine counties to implement a comprehensive regional strategy for housing, understanding that the housing crisis does not end at any one cityâs boundaries. BAHFA is a joint initiative of the Association of Bay Area Governments (ABAG) and the Metropolitan Transportation Commission (MTC).

It was hoped that BAHFA would lead an effort to create a regional funding source for housing on the November ballot, but the decision was made to hold off until 2022. According to Alameda County Supervisor Scott Haggerty, who chairs both BAHFA and MTC, âdue to the COVID-19 emergency and the resulting economic downturn, MTC and ABAG both opted not to put a measure on the November ballot. But when the pandemic finally is behind us, the need for a big investment in affordable housing will remain.”